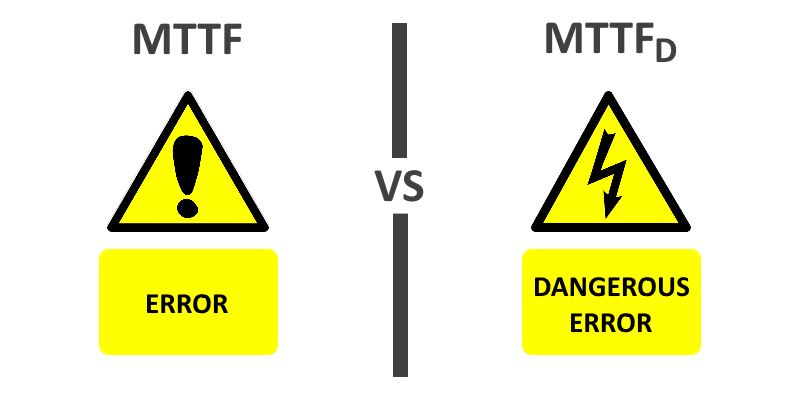 What is the MTTF value?

The MTTF value is a term from the field of risk analysis & risk evaluation. The exact meaning is mean time to failure or simply the mean life of a component. The MTTF has gained particular relevance due to EN ISO 13849-1. In accordance with this standard, the performance level can be calculated on the basis of the MTTF. This means that this value is used for the risk evaluation of machinery and plants. The value is therefore also important for CE marking, as machine safety must also be assessed as part of the conformity examinations.

What is the MTTFD value?

Difference between MTTF and MTTFD

The difference between MTTF and MTTFD is that the MTTF value merely provides a neutral indication of the average fatigue life of a component. The MTTFD value, on the other hand, indicates the operating time until a dangerous fault occurs. This means that, here, only those failures that affect the safety function are considered and included in the performance level. Example of a non-dangerous failure: The failure of a certain sensor could lead to engine damage, but is not relevant for safety considerations in risk and hazard assessment.

Parts manufacturers (e.g. WIKA) cannot provide the MTTFD value since they only know when their component fails on average, but not which, if any, faults are dangerous faults. This depends entirely on the respective function. Furthermore, the arrangement of several elements can also affect the total time to a dangerous failure (MTTFD). This means that the MTTFD can only be determined by the person who designs the machine or plant with the corresponding component and plans the safety functions they have designed. This is usually the developer or the designer. They can calculate the MTTFD.

Note
If you have any further questions on MTTF or MTTFD, your contact will gladly help you.

See also our post
The definition of MTTF and MTBF ‒ and what is the difference?