Perhaps you’ve already noticed that in some instances a Pt100 is specified with an accuracy class B or A. At other times, it has the class F 0.3 or F 0.15. This blog post looks at the specifications for Pt100 in the international IEC 60751 standard and explains the difference in accuracy classes.

Characteristics of a Pt100

The corrosion-resistant, precious metal ‘platinum’ has a high long-term stability. In addition, a Pt100 features a high reproducibility and a low non-linearity. Other very useful properties are a very good thermal shock resistance and high measurement accuracy. Last but not least, the wide temperature range that can be realised with a Pt100 makes it the most frequently used measuring element in industrial temperature measurement.

Meaning of the international IEC 60751 standard

For industry, standards are very important. They ensure that products possess a constant, traceable quality. If a product is manufactured in accordance with international standards, all market participants can be confident that the characteristics described within it are met. Thus, a Pt100 in accordance with IEC 60751 always has the same base resistance values and also a defined tolerance curve. This allows the user, for example, to replace a defective thermometer with a new one, without having to readjust the control loop. Likewise, one controller can easily be exchanged for another, provided the latter has a Pt100 input.

Differentiation between measuring resistor and thermometer 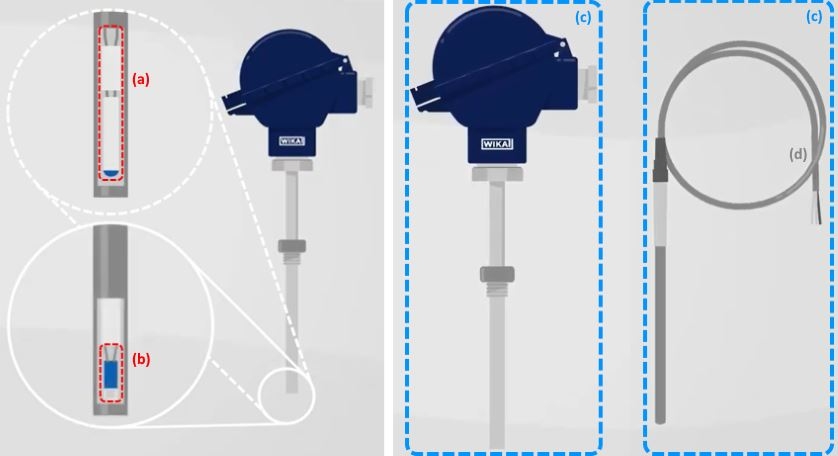 Development history for the IEC 60751 standard

Bases and results of the revision of the IEC 60751 standard

Table 2: Accuracy classes and temperature ranges for Pt100 thermometers in accordance with IEC 60751

Other than the temperature ranges, there are further differences in the two Pt100 versions. The most important is the design. A wire-wound measuring resistor is considerably larger than a Pt100 in thin-film design. Very short insertion lengths, which are often necessary in machine building, can only be achieved practically with a film measuring resistor. The lower mass of the film measuring resistor leads to a shorter response time of the thermometer. Also, the vibration resistance is therefore better than with a thermometer with a wire-wound Pt100.

Meaning of the measuring resistor type

The thermometer marking in accordance with IEC 60751 does not specify the type of measuring resistor. This is usually of no concern to the user as long as the specifications required for the application are met. However, due to the different advantages of the two types, it may be helpful in individual cases to know the type installed. Thus, for example, a thermometer with a film measuring resistor can be fitted even where it is only immersed a few millimetres into the medium. Whereas, with a wire-wound resistor – simply because of its length – a measuring error can occur because the measuring element may not be able to be fully immersed in the medium.

Film measuring resistors are the standard design in WIKA thermometers, unless the temperature range or an explicit customer request exclude them. What are your experiences with resistance thermometers? Which tolerance specification do you prefer and why? You are welcome to use the comment function or write to me.

Roland Sachs Dipl.-Ing.
Product Management
WIKA Alexander Wiegand SE & Co. KG
I have almost 30 years of professional experience in the most diverse fields of temperature measurement. Since 2008 I have been working in the product management for Industrial Gauges and I look forward to sharing my comprehensive knowledge with you in this blog.
Related articles
Accuracy Electrical connection Energy efficiency Ex protection Hydrogen Measuring range Mobile hydraulics Pressure Pressure measurement device Pressure sensor Pressure switch Process connection Renewable energy Safety Switching function
News subscription
The WIKA news subscription informs you, free of charge, by e-mail whenever there is a new blog article. Simply define what subjects interest you and you'll be kept up-to-date! Subscribe