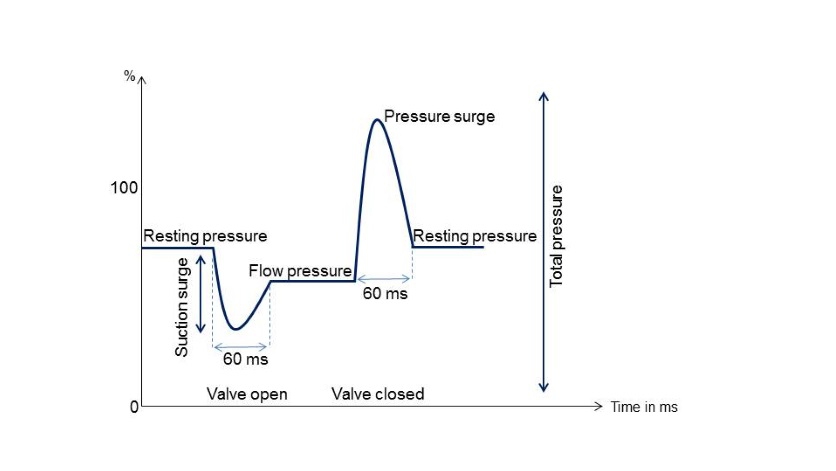 When using pressure sensors, especially in applications with pumps or fast-acting valves, there will often be pressure spikes.

What is a pressure spike?

A pressure spike or pressure pulse denotes a rapid rise or drop in pressure. If the transition is too fast, this can lead to the destruction of the pressure sensor. Such sensor faults occur particularly frequently as a result of the water hammer effect.

The graphic shows the pressure profile for the closing and opening of a valve in a water pipeline, as an example. To start with, the so-called ‘static pressure’ – in our example a notional 80 % of the sensor nominal pressure – is constant. Now, if the valve is opened, then the water starts to flow again in the pipe and the pressure drops, so that, within 30 ms, it is only now 40 %. As things proceed, the pressure settles once again to a constant flow pressure, which acts throughout the pipeline. If the valve is closed again in a subsequent operation, the pressure rises through the stopping of the water flow. The pressure rises, for example, from 60 % to 130 %. For this short duration, the sensor is then operating in its overload range. This is possible – up to the maximum overpressure for the pressure sensor given in the data sheet – without any permanent damage. The pressure rise of around 70 % occurs within 30 ms.

When is a pressure spike too fast?

For pressure sensors from WIKA, as a rule, a pressure rise of 0-100 % of the nominal pressure should not occur in less than 1 ms (the same also for a pressure drop). The example thus does not feature anything near critical pressure rise or pressure drop times. With any faster changes, damage to the sensor cannot be ruled out, and so suitable measures must be taken, such as, for example, snubbers, spark-eroded channels or other methods.

Note
Should you need any help with choosing a suitable solution for your pressure, temperature or level measurement requirement, your contact person will gladly be of assistance.

See also our article
Curb the pressure spikes – prevent damage to pressure measuring instruments – here you can find out more about the water hammer effect.