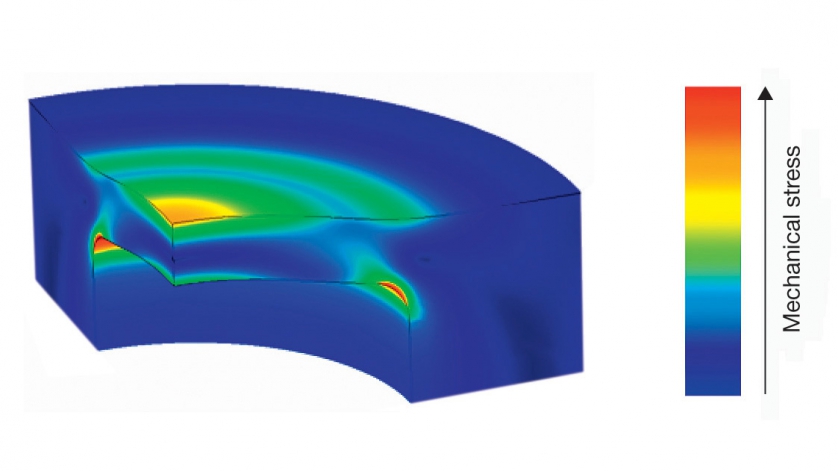 In the manufacturing operation of pressure sensors, autofrettage denotes the process of active “overload” by subjecting the pressure sensor selectively once or several times to a pressure above the nominal pressure range. This process is applied, in order to achieve maximum stability, in particular of the zero point, in later operation. Assuming a suitable design of the sensor, autofrettage enables many years of trouble-free operation of the sensors even at high load cycles reaching the specified overload range, without resulting in zero-point shift or similar effects.

In autofrettage, certain local areas of the sensor, in which during the selective overload the yield point of the sensor material is locally exceeded, become plasticised, resulting in a permanent change of the instrumentation characteristics. This selective effect on the structural conditions by means of autofrettage is an integral part of the development of the sensor and of the associated manufacturing process. Which pressure the sensor is subjected to and how often, must be determined individually for each sensor design by means of a complicated FEM simulation and extensive test series.

Caution – no experiments of your own! However, it must not be concluded that every sensor will automatically benefit from subjecting it to autofrettage. Autofrettage can only be used for ductile materials, but under no circumstances for brittle ones. Conditioning must be scheduled and carried out very selectively and with great care during the production stages. Ill-considered “overpressurising” of pressure sensors by laymen who like experimenting can not only damage the sensor permanently, but also result in dangerous preliminary damage and subsequently possibly in accidents caused by fatigue and bursting of the sensor. In this way, an improvement in instrumentation will only be achieved, if at all, by hit or miss.