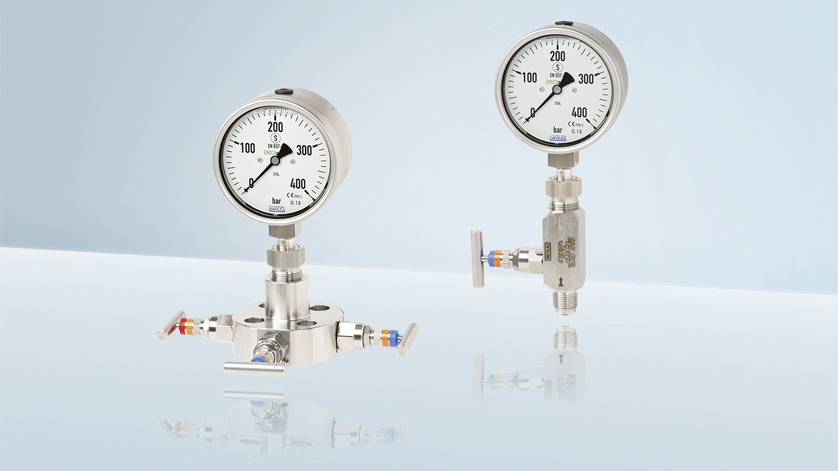 Whether in the chemical industry, in petrochemical companies or in the processing of crude oil and natural gas: Numerous processes contain methane, which also damages the climate via fugitive emissions. Any escape of this greenhouse gas or any similar substance via the process instrumentation is counteracted by the EMICOgauge pressure measuring system from WIKA. This involves the assembly of a pressure gauge in a safety version with a valve to prevent fugitive emissions.

Compared to similar combinations, the EMICOgauge system (EMICO = EMIssion COntrol) represents a crucial further development: It is the first of its kind to be leak tested in its entirety in accordance with the requirements of TA Luft (VDI 2440) on fugitive emissions. A special design has made this possible.

In principle, any pressure measuring instrument can be coupled with one of the WIKA fugitive-emission instrumentation valves. This is done using a mounting thread – which means a potential risk of leakage. The EMICOgauge system, instead, has a cone/thread fitting with a freely rotating adapter and a redundant sealing system (metal-to-metal sealing plus O-ring). The seals themselves are made of materials that are particularly resistant to chemical and thermal influences. Due to the high-quality workmanship, WIKA guarantees the leak tightness of the assembly, even after being installed and removed twenty times.

In the conventional assembly of pressure measuring instrument and valve using a mounting thread, there are two potential points for fugitive emissions (picture left). The EMICOgauge system eliminates such a leakage due to its cone/thread fitting with freely rotating adapter and redundant sealing system.

Protection for both people and process

The measuring system therefore meets the highest safety standards. It eliminates fugitive emissions from methane and other substances, permanently. Its protection extends both to the environment and to the processes and people who work on it. Methane, for example, not only has a high global warming potential, it is also highly flammable. The gas is also the reason why the instrumentation valve is combined with a pressure gauge. The measuring locations in the plant areas where methane flows through pipelines are mainly equipped with display instruments.

The EMICOgauge system measures pressures up to 420 bar (6,000 psi) with the model 2xx.30 pressure gauge in S-3 safety version. This variant protects the user from injury in the event of a fault due to overpressure. For the second component of the measuring system, the valve, the following models in fugitive emission design are available, in accordance with ISO 15848-1 and TA Luft: the IVM monoflange and the IV1x and IV2x (block & bleed) needle valves. The commissioning of the EMICOgauge system is carried out in line with the plug-and-play principle. The freely rotating swivel adapter allows 360° positioning of the display and easy dismounting of the measuring instrument for calibration or replacement.

Note
Further information on the EMICOgauge system, and the instruments that can be combined with it, can be found on the WIKA website. A flyer can also be downloaded from there. If you have any questions, your contact will gladly help you.

Also read our posts
Avoiding fugitive emissions through prevention
Play it safe with double block & bleed
Combination of pressure measuring instrument with accessories: Instrument hook-up instead of own assembly
What role do valves play in plant safety?

Get further insight into our instrumentation valves in the following video:

Pratik R. Vishwakarma Master of Business Engineering, Bachelor of Engineering
Product Management
Alexander Wiegand SE & Co. KG
Since completing my dual studies in May 2019 at WIKA Klingenberg, I have been working as a product manager for instrumentation valves and accessories in the pressure division. Through the WIKA blog, I would like to articulate the importance of valves and accessories and also elucidate the current trends in the valve industry. I look forward to your feedback.
Related articles
Accuracy Adjustment Chemical Diaphragm seals DirectDrive Force measurement Mobile hydraulics Operating conditions Output signal Pharmaceuticals and biotechnology Pressure measurement device Pressure sensor Process safety Processtransmitter Temperature effect
News subscription
The WIKA news subscription informs you, free of charge, by e-mail whenever there is a new blog article. Simply define what subjects interest you and you'll be kept up-to-date! Subscribe