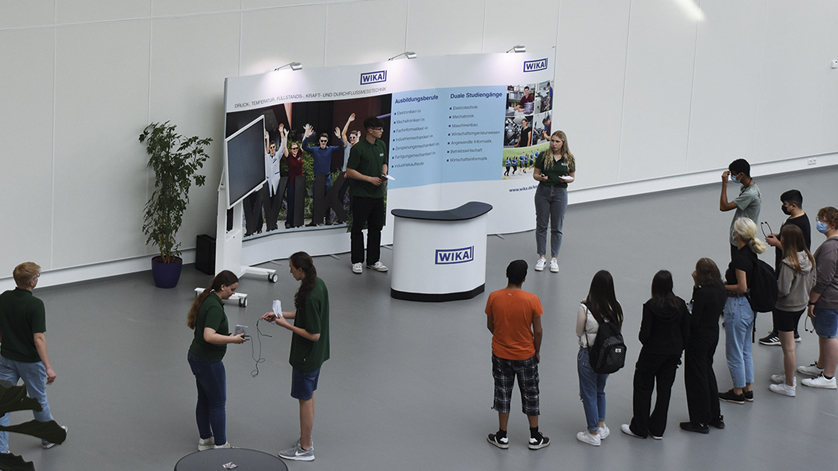 20 years of WIKA-Live – finally, the career orientation week for pupils from regional schools around the head office in Klingenberg actually took place live again – in its “anniversary year”. It had been forced to take a break due to the pandemic.

Trainees and the training team were once again visibly looking forward to the challenge of showing WIKA, in person and on-site, to young people before the end of their school year and giving them tips on choosing a career. At the same time, they were also able to show their guests the new development centre. Everyone involved was mightily proud of this.

The concept of WIKA-Live dates back to 2002. Back then, a group of eight trainees developed the tours and the schedule. Later on, the trainees would regularly take over the WIKA-Live project in their second year of training. From the very beginning, the presentation of the company by trainees was extremely well received by the young visitors. This has not changed until today.

Schools are impressed with the concept

The schools in the surrounding area continue to be impressed with the concept. The conditions and possibilities for WIKA-Live in the new building with grandiose architecture and a tailored concept are even better now. Several groups can learn about the professional world of WIKA in an enhanced way at the same time.

The record for “20 years of WIKA-Live” is impressive: Since 2002, more than 5,000 pupils and their teachers have visited WIKA. When the information week was held, more than 500 trainees took part. The company’s junior staff has also been able to develop their own skills during the organisation and presentation. WIKA-Live is – and will remain – an important event on the WIKA calendar.

Note:
For more information about training and other career opportunities at WIKA, please visit the company’s website under the heading “Career”.