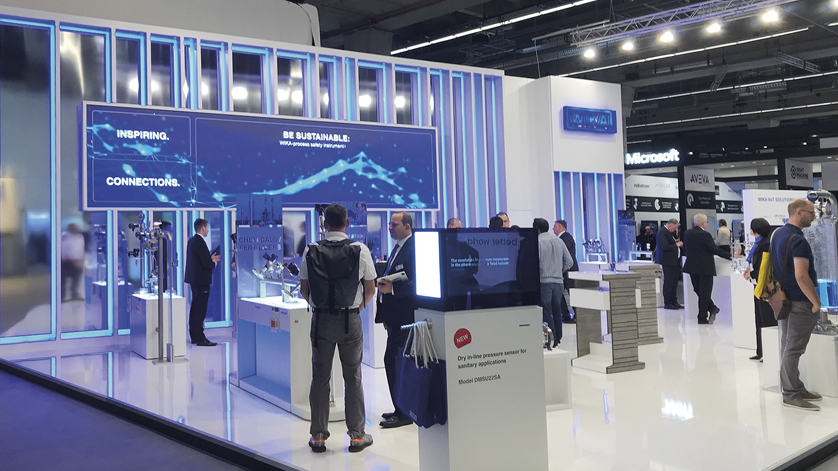 At Achema 2022 in Frankfurt am Main, the global process industry finally met again at its leading trade show, after several postponements due to Corona. The numbers of exhibitors and visitors were much lower than usual since circumstances dictated that this event got scheduled during peak holiday time in Europe. Nevertheless, the WIKA trade show team was satisfied with the outcome.

Those responsible in Klingenberg adapted the planning to the circumstances in good time. They reduced the stand area for Achema 2022 from 320 to 120 square metres and moved the stand from hall 11.1 to hall 11.0, as a higher visitor frequency was to be expected there due to the walkways. With the calibration van on the open ground in front of hall 11, they were also able to allocate a dedicated space for service.

On the stand itself, the new PURE-480 trade show concept, with a large LED wall, was used for the first time. On the LED wall, new products were presented in line with the motto “Inspiring. Sustainable. Connections.” and competence in the field of measurement technology was highlighted. With the “dry” DMSU22SA process transmitter, WIKA also exhibited a world premiere, one that fascinated the public as well as the press. Ten lectures in the digital space complemented the physical trade show programme. These provided an informative platform for everyone interested and who were unable to take part in the trade show as a consequence of travel restrictions.

After the five days of the trade show, all colleagues involved were relieved that the first major trade fair after the long Corona break had gone well, despite the still prevailing pandemic. Customers were keen to discuss their projects with WIKA. However, the contact figures of the past could not be achieved − after all, compared to previous years, Achema 2022 only counted about 60 percent as many exhibitors and about 50 percent as many from the public. Nevertheless, the quality of contacts has increased. The new trade show concept, up to modern market standards through the use of digital media, received a very favourable response from the visitors.

Note
An overview of the trade shows and events in which WIKA is participating can be found on the WIKA website. If you have any questions, your contact will gladly help you