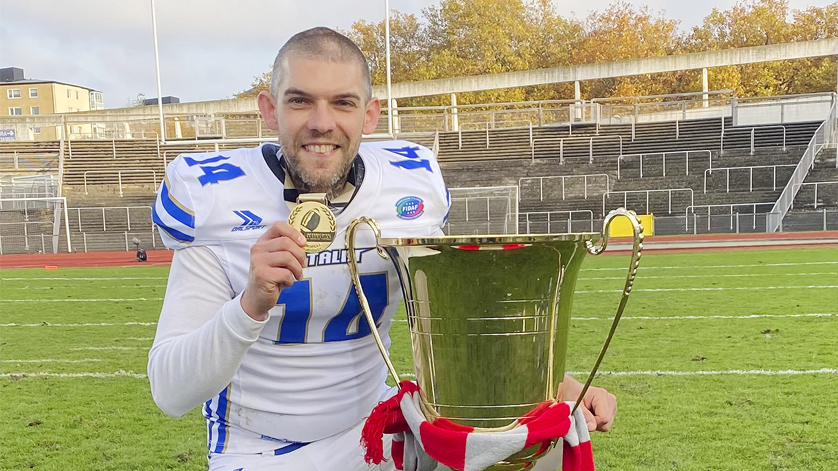 Matteo Felli operates a heavy lathe at Euromisure, a WIKA Group company in Italy. In his spare time, he is a kicker for the Panthers Parma American football team. In his sport, our colleague celebrated a stunning success with the Italian national team at the 2021 European American football championship.

At the end of last year, in the Swedish city of Malmö, the outcome was totally sensational. Italy’s national American football team won the European championships and was able to take the cup home for the first time in 34 years. The “Blue Team” won the day over a shocked Swedish team by 41:14.

Matteo Felli from Euromisure was on the winning team. His career tells a special story: He played soccer until 2015 when he had to undergo spinal surgery. “During rehab I played American football in a role involving as less contact as possible, waiting to come back to soccer again”, Matteo said. But then, in 2016, the opportunity came up to try with the Parma Panthers.

After his participation in the Italian League in 2017, the Federazione Italiana di American Football (FIDAF) called Matteo up for the Italian national team, which was training with the aim to rise to Group-A. This was achieved with victories against the Austrian and Swiss teams. A surprising success considering that American football is only a marginal sport in Italy.

“I got used to watching many and many videos of American training camps, NFL and other league matches, shooting and reviewing myself and to understand my mistakes”, Matteo explained. As the first Italian, Matteo also attended a training camp in Mobile, Alabama. This was an event to find new talent for the NFL. “Even though I was not selected I had the opportunity to develop my skills with players who have played on prestigious pitches.” Matteo was happy to remain in Italy close to his family, beloved ones and workmates, all of them enthusiastically supporting him since forever.

Now this ambitious American footballer has his eye on the IFAF 2023 world championship. By the way, he tackles his main job at Euromisure with the same passion. And his colleagues all love him for that.

Note:
On the WIKA website you can find out more about WIKA and Euromisure.

In addition, read the article about the WIKA TriTeam:
Balance of indoors and outdoors