Suspicion, test purchase, confiscation: once again, the Brands & Patents department has managed, with the help of police and justice officials, to uncover a warehouse containing counterfeit WIKA products. This time, the raid was on a dealer in Malaysia. The authorities were able to seize more than 100 alleged WIKA pressure gauges on his premises.

Another success in the fight against plagiarists 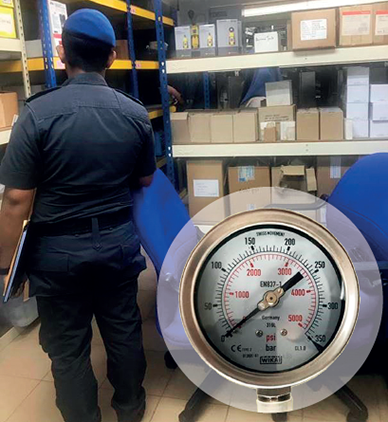 By searching the warehouse, the Malaysian police secured more than 100 counterfeit WIKA pressure gauges of the shown model.

The devices originated in China. “We have had this manufacturer on our radar for a long time”, states the head of the Brands & Patents department. In this particular case, the pressure gauges had clearly been sent to Malaysia as no-name items. There, they were first recalibrated by a calibration company – an indicator of inferior quality – and then labelled. Then the devices were sent to the dealer. WIKA is exhausting every judicial option available to it to take action against plagiarists. To protect the WIKA brand and the product quality that it embodies, uncompromising action is essential. The focus here is on China.

Over the last few years, the authorities there have responded cooperatively. The head of the Brands & Patents department has also observed that Chinese companies who are suspected of being plagiarists are behaving more reticently and have no wish to attract attention to themselves. His explanation is this: thanks to the new social credit system, manufacturers found guilty of counterfeiting or other offences lose access to long-distance trains, flights and the education system. For the family often a very painful restriction, and one that diminishes the wish to break the law.

Note
Further information on our products can be found on the WIKA website. Would you like to learn more about stopping plagiarism? Take a look at our video (in German):