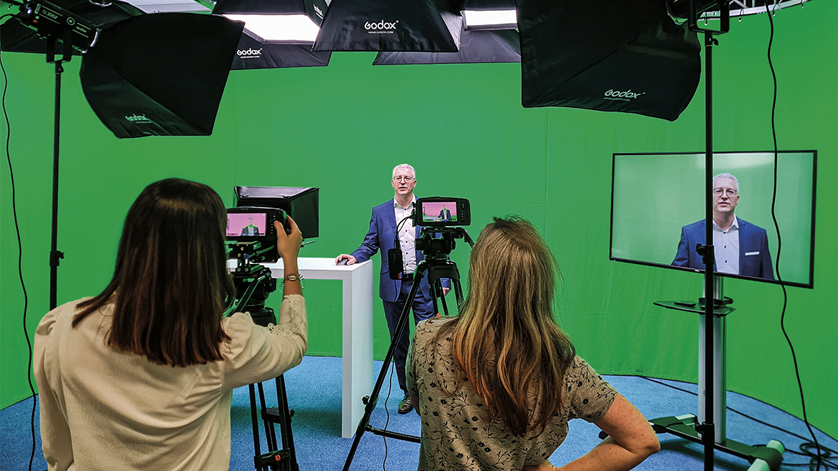 WIKA has established a professional video studio at its Klingenberg site. In an area of more than 62 square metres, image and sound equipment in TV quality has been installed for different formats – presentations, interviews and webinars. The material will support the company’s internal and external communication.

In the video studio, several cameras with high resolution (4K) are available for recordings. As in a real TV studio, the green screen is replaced with a virtual studio, either directly during the recording or afterwards. The lighting can be adjusted to the respective recording situation. This ensures the right light quality at all times. In addition, a teleprompter for reading text helps presenters deliver a continuous speech flow while keeping eye contact with the audience.

WIKA has put together a cross-departmental team for the production of this material. The partner company that put together the studio equipment handled their training. At first, the group had familiarised themselves with the technology, the basics of filming and how to use the camera in the video studio. For example, they learnt which ISO values (light sensitivity), which apertures and which shutter angles they should use for the cameras. In addition, the team also played through various recording situations such as an interview and a presentation. They aligned the cameras appropriately, checked the camera and lighting settings and the sound quality. The team also shot test videos and then edited them in post-production, mainly by adjusting the sound and virtual background.

Even during the training, the new film makers produced their first “real” video: an interview on the topic of Hygienic Design. After editing, they published the video directly via a livestream on LinkedIn. Well prepared, the WIKA video team tackled their first big task immediately after their training: producing ten presentations for the HANNOVER MESSE and Achema trade shows.

Note:
Further information on WIKA can be found on our Website. Videos – both about the company and about measurement technology topics – can be found on the YouTube channel of the WIKA Group.