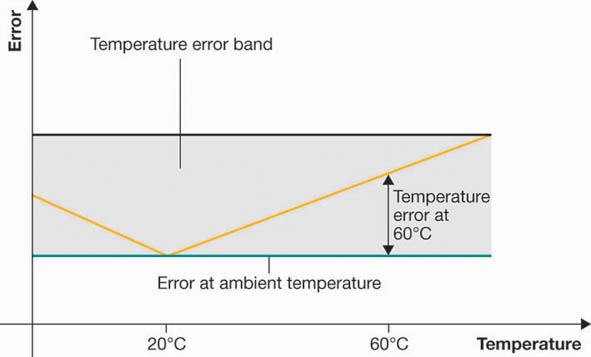 Passive temperature compensation: Sections of the characteristic accuracy curve of the pressure sensor are measured at different temperatures during the manufacturing process. Then, the previously determined temperature errors are compensated by passive elements (resistors) within the electronics of the sensor or by corrections of specifically  designed resistance structures directly on the sensor  element itself (e.g. by laser-trimming). The (passive) resistor elements used have an almost linear temperature behavior, it is, however, only possible to compensate 1st order errors. Temperature errors of higher order, i.e. strong bending of the characteristic curve under temperature, can not be compensated.

The second method uses the electronics of the transmitter and a higher-order equation resulting from the regression of the acquired measurement values in order to compensate then the expected error. During operation, this signal processing makes it possible to automatically, i.e. “actively”, compensate the pressure transmitter ‘s temperature error using the calculated correction factors within a specified temperature range (e.g. 10-60°C). The most commonly used method to minimize temperature errors of pressure sensors is a passive temperature compensation. This is the traditional method which is widely used.