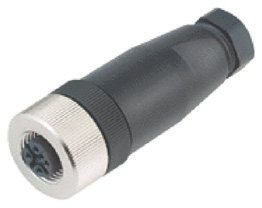 However, if you are uncertain in your selection of the suitable M12 x 1 mating connector (as there is a relatively large number of versions: straight/angular, 4-pin/5-pin, etc….), it would be best to contact us. There you will be given advice, and a solution tailored to your needs will be recommended.

Michèle Beyer Dipl.-Ing. (FH)
Product ManagementWIKA Alexander Wiegand SE & Co. KG
I joined WIKA in 1998 and have been working from the start in product management. Every day I answer a wide range of questions on the topic of electronic pressure measurement. Many questions are asked over and over again by WIKA staff and customers from all over the world. So why not answer the most interesting questions in this blog?
Related articles
Accuracy Air-conditioning technology Control Electrical connection Energy efficiency Heat pump Indication Ingress protection Measuring instruments Pressure sensor Refrigeration technology Standards/approvals/directives Submersible pressure transmitter Temperature effect Temperature error
News subscription
The WIKA news subscription informs you, free of charge, by e-mail whenever there is a new blog article. Simply define what subjects interest you and you'll be kept up-to-date! Subscribe