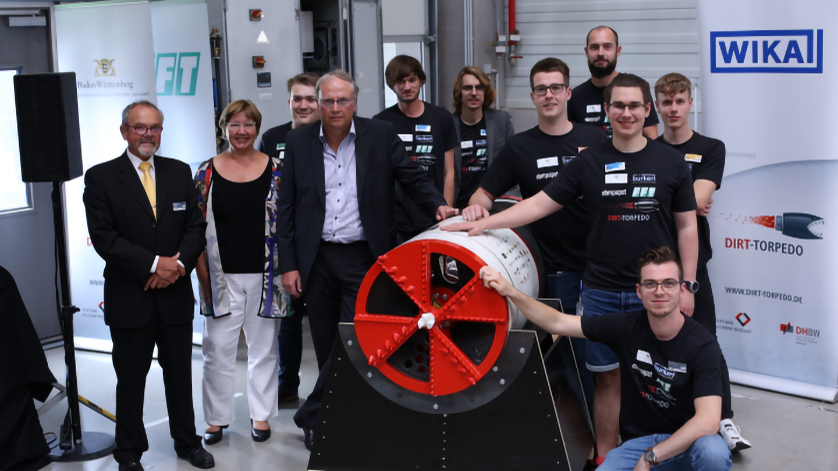 Being faster than a snail is a tremendous challenge for a tunnel boring machine. Students at DHBW Mosbach have mastered this, and have made it through to the final of an international competition with the “Dirt Torpedo”. WIKA co-sponsored the project by providing measurement technology and a grant.

Tunnel boring machine made it into the final round

Of the total of 400 entries in the competition, called by the American entrepreneur Elon Musk (co-founder of Tesla and others), twelve made it through to the final round. The finalists were tasked with drilling a 30-metre-long tunnel in California’s Mojave Desert. However, due to conditions being changed on-site at short notice, only the crew from TU Munich were able to start. The students at DHBW Mosbach were disappointed about the way the competition ended, which was, ultimately, not a competition at all. Nevertheless, they are justifiably proud of their “Dirt Torpedo”.

WIKA’s measurement technology is located in the rear part of the “Dirt Torpedo”. From there, a fibre-reinforced, fast-curing concrete is pressed against the tunnel wall through twelve valves to support it. To monitor the pressure of the concrete feed, WIKA provided twelve diaphragm seal systems with mounted transmitters of model S-20 and a 1…10 V output signal. The flush diaphragms of the diaphragm seals are extra strong to allow them to permanently resist the abrasive forces of the concrete. No residues can adhere to their surface. WIKA’s sponsorship of the “Torpedo” project amounts to a total of 20,000 euros.

The company and DHBW Mosbach have been closely associated since 1985. As a dual partner, WIKA enables future specialists to graduate in a current total of seven degree programmes, with practical phases at WIKA’s headquarters in Klingenberg. So far, around 250 WIKA students have graduated from the DHBW. WIKA also has the status of a “Gold Partner”, which means it provides the university with “an extraordinary level” of support. Partner companies are involved in the university through the Pro DHBW Mosbach foundation, and thus promote the dual system. Furthermore, Alexander Wiegand is the Chairman of the Board of Trustees.


Note
Further information on our diaphragm seal systems and pressure transmitters (pressure sensors) can be found on the WIKA website. If you have any questions, your contact will gladly help you.