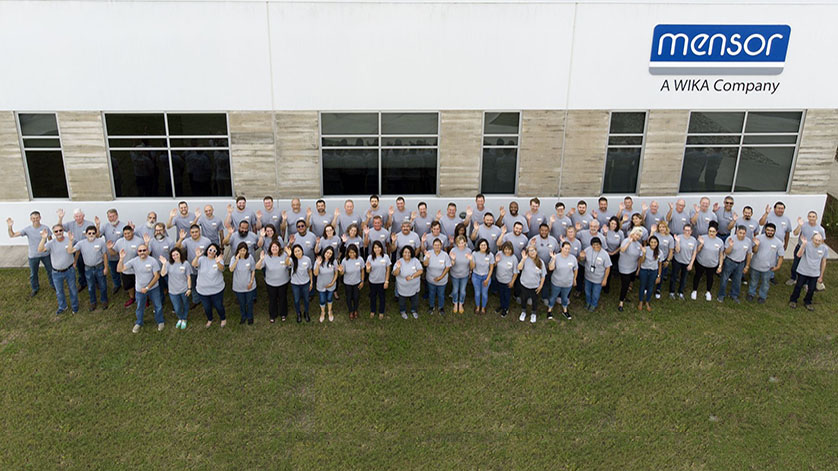 Without doubt, Mensor plays a prominent role in the world of electronic pressure measurement. This WIKA Group company is based in San Marcos (Texas) and it was founded precisely 50 years ago. Since then, time and again it has set new benchmarks in the precision instrument sector, among others, with pressure controllers.

How it all began

With its founding on 24th June 1969, Mensor started with five employees in the company in Houston (Texas). Its objective was to develop and manufacture high-accuracy and high-quality pressure measuring instruments that were easy to use. The first product, a quartz pressure gauge for the aerospace industry, went onto the market back in 1970. In 1978, Mensor was relocated to San Marcos. More than 30 families moved with the company. Less than three years later, Mensor had a serious stroke of bad luck – a fire destroyed the company building. The operation had to be stopped. Thanks to the support of all of its employees, customers, suppliers and the San Marcos community, Mensor was able to relaunch production just six months later in a newly constructed building.

Mensor’s success and future potential are founded primarily on the comprehensive experience of its employees in the field of precision pressure measurement and precision control. For example, before their time at Mensor, the company founders were involved in the development of the first quartz helical pressure gauges. Based on this expertise, the new company went on to develop early pressure gauges and controllers.

By the early 1990s, the measuring element was switched from a quartz helix to a silicon sensor. This change reflected the company strategy, which was to offer its customers a more user-friendly yet still affordable type of technology. As the years went by, Mensor’s R&D team raised silicon sensors to an uncontested level within the industry. Further developments gave rise, among other things, to the modern high-end calibration instruments such as the CPC6050 pressure controller and the CPT9000 precision pressure sensor.

Once most of the founding members of the company were already in retirement or about to reach that point, two of the founders endeavoured to achieve a merger between Mensor and a larger company. This endeavour was successful – from 2006 on, Mensor has been a member of the WIKA Group. The reputation of the Texan company and its outstanding portfolio of products solidified WIKA’s position as global market leader in calibration technology.

Mensor now employs almost 100 people, many of whom have been with the company for more than 25 years. Right from the start, the company has fostered a family-oriented atmosphere. It is customary for employees to celebrate birthdays, work anniversaries, public holidays and similar events together. In addition, Mensor places importance upon giving something back to the community of San Marcos, the town in which its employees live and work. This attitude is reflected by the employee-run non-profit organisation Mensor Cares, and in annual fundraising campaigns and food drives.

Respecting the past, looking forwards

Mensor has undergone a few transformation over the past 50 years. But its commitment to quality, customer satisfaction and innovation will never change – today as then.


Note
Further information on our portfolio in the field of calibration technology can be found on the WIKA website.