“The product is suitable for use in Zone 1, as well as for use in Class 1, Div 1.” This statement is heard or read again and again in the descriptions for products for use in hazardous areas. But what is the difference between Zone 1 and Class 1, Div 1? Let’s compare the Zone model with the Division model.

The explosion protection of equipment such as, for example, pressure sensors and equipment, are described internationally in the IEC 60079 series of standards. This series of standards, which is also the basis of the EU 2014/34/EU (ATEX) directive, describes, among other things, the ignition protection types for electrical equipment as well as the evaluation or classification of the hazardous areas of a plant into different areas.

However, national regulations may differ from this standard. This is the case, for example, with the construction and operation of electrical systems in North America. In the USA, the regulations are described in the National Electrical Code (NEC) and in Canada in the Canadian Electrical Code (CEC). One of these differences is the determination and classification of hazardous areas. The following table describes a simplified comparison of the different designations for the classification of gas hazardous areas: 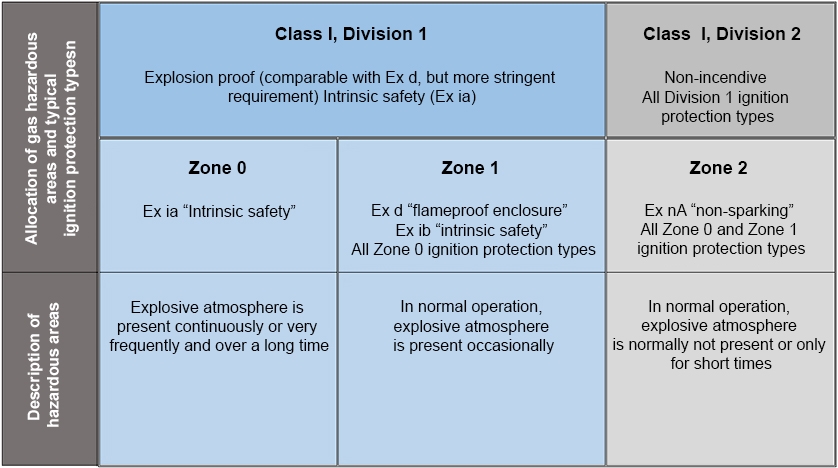 In the meantime, the NEC and CEC have been expanded with regard to the international series of standards, so that both now also support the Zone model for the classification of hazardous areas and the CEC even requires this for new installations.

Note
If you have any questions about the various models or for Ex protection, your contact person will be pleased to assist.

Jens Bargon Dipl. Ing. (FH)
Product Management
WIKA Alexander Wiegand SE & Co. KG
For almost 10 years, I have been looking after products from various areas of measurement and control technology - since 2016 at WIKA as a product manager in the field of electronic pressure measurement. Within this, my focus lies with the products for hazardous areas, for refrigeration technology and products with bus technology. The WIKA blog offers us a very good opportunity to convey knowledge and to answer recurrent questions. I would be very happy to receive feedback on and suggestions for articles.
Related articles
Approvals Automation Ex protection Failure Filling height Flange Force measurement Level sensor Level switch Medical engineering Pressure Pressure switch Process connection Safety Submersible pressure transmitter
News subscription
The WIKA news subscription informs you, free of charge, by e-mail whenever there is a new blog article. Simply define what subjects interest you and you'll be kept up-to-date! Subscribe