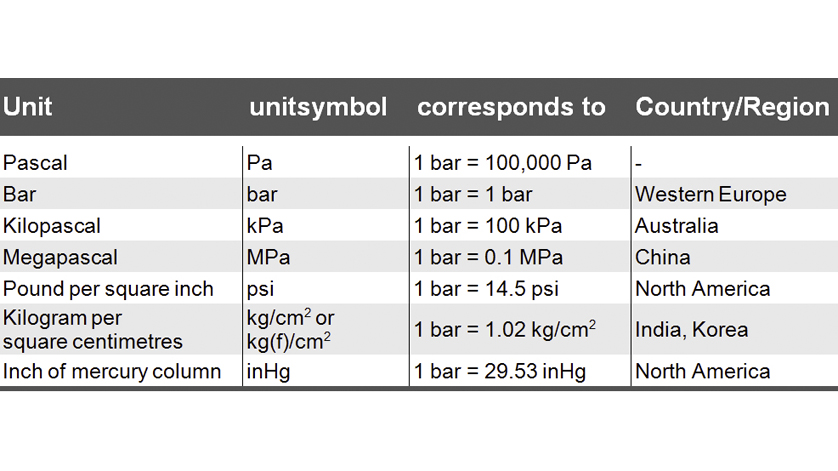 You must have already asked yourself once in a while why there are so many different pressure units worldwide: when are they used and which units are used most frequently and where?

These questions can be answered quite easily: the SI unit for the physical quantity “pressure” established many years ago (and in many countries prescribed by law) is the “Pascal (Pa)”. However, in pressure measurement, the Pascal is hardly used despite that, and instead typically the (also permitted) “bar” is used.

Which is quite understandable, given the fact that for most technical applications 1 Pascal is far too small for practical use. Example: A normal domestic water main is operated at 400,000 – 600,000 Pa (4 – 6 bar ). This means that even at relatively small pressures the “figures” become already quite large and unmanageable.

This is why in Western Europe the SI-compliant unit bar is the most widely used unit. In contrast, in Australia and China the units “kilo-Pascal (kPa)” and “mega-Pascal (MPa)” have become established. In North America, the preferred pressure unit is “psi (pounds per square inch)”.

In many Asian countries, such as India and Korea, the unit “kilogram per square centimetre (kg/cm²)” is found quite often.

Michèle Beyer Dipl.-Ing. (FH)
Product Management
WIKA Alexander Wiegand SE & Co. KG
I joined WIKA in 1998 and have been working from the start in product management. Every day I answer a wide range of questions on the topic of electronic pressure measurement. Many questions are asked over and over again by WIKA staff and customers from all over the world. So why not answer the most interesting questions in this blog?
Related articles
Hydrogen IO-Link International Measuring point Output signal Pressure sensor Pressure switch Project Resistance thermometer Standards/approvals/directives Switching function Switching output Temperature Thermocouple Time response
News subscription
The WIKA news subscription informs you, free of charge, by e-mail whenever there is a new blog article. Simply define what subjects interest you and you'll be kept up-to-date! Subscribe