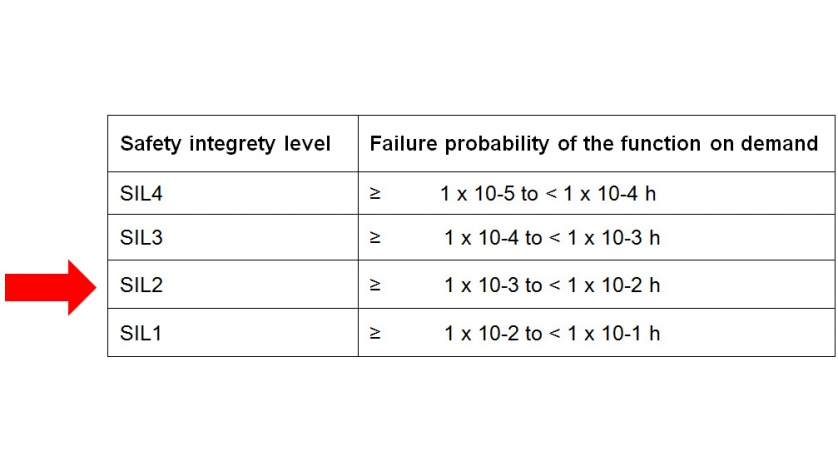 Customers often ask us: “Can my product be part of a safety function? Which standards or directives apply in this case?” The most important safety directives and standards available today are SIL (Safety Integrity Level) and PL (Performance Level).

The failure rate “λ” is a variable determining the reliability of products. It indicates how many instruments on average fail within a certain time span, indicated in “failure in time” unit. In case of a consistent failure rate, this inverse corresponds the mean service life MTTF (Mean Time To Failure). In case of a reparable product this corresponds to the mean time between failures (MTBF).

The unit for the failure rate is the so called FIT (Failure In Time) – it is indicated in the number of failures per 109 hours.

However, the failure rate cannot be obtained from a single instrument or system. It is estimated from observations of a large number of identical instruments / systems.

The failure rate however, also depends on the environment and the environmental influences where the system operates  (vibrations, temperature fluctuations, humidity, exposure to sunlight, etc.). A large number of these factors are tested whilst developing safety-critical transmitters in our laboratories, e.g. with aging tests.

Looking at a single instrument or system, we see an increasing failure rate due to aging, e.g. due to mechanical wear, chemical decomposition of the materials, insulation breakdown in electrical plants or the influence of UV radiation (“age-related diseases”). An increase of the failure rate is also caused by irregular maintenance.

The intrinsically safe pressure sensor IS-20 meets the requirements of the safety integration level SIL 2. This level has a mean time to failure of ≥ 1 x 10-3 to < 1 x 10-2 h according to the following established reference table (excerpt from IEC/EN 61508).