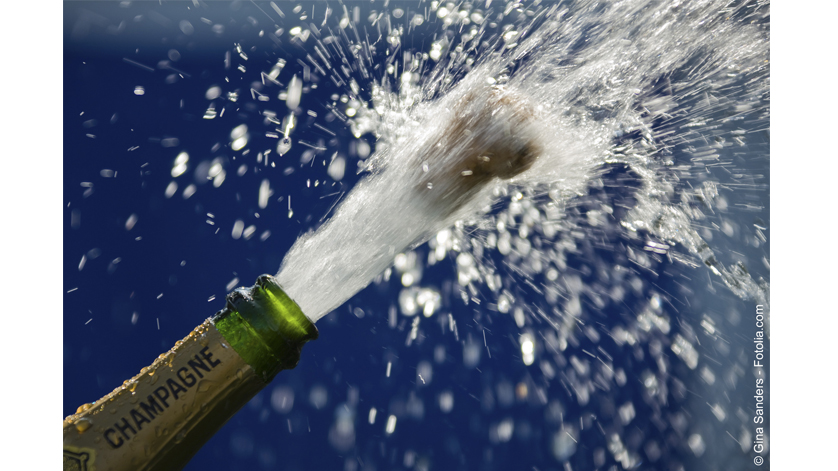 Overload can quickly expose the limit of any pressure measuring instrument. Diaphragm pressure gauges withstand a significantly higher maximum pressure when compared to instruments with Bourdon tubes. This protection is due to their physical design. 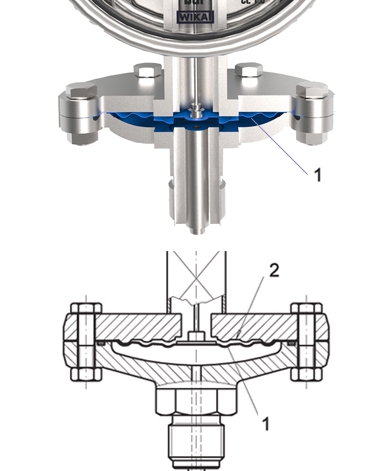 The high overload safety results from the support of the diaphragm (1) on the upper flange and its contour from flattened waves. With measuring ranges in the mbar range, the protection is increased through a specially machined diaphragm bed, against which the diaphragm rests completely (2).

A cross-section of the measuring cell illustrates the reason for the pronounced overload safety of a diaphragm pressure gauge: Its diaphragm can be supported against the upper flange. Furthermore, since the diaphragm features a contour with flattened waves, the protection factor is further increased because of the greater contact area. Diaphragm pressure gauges from WIKA have a standard overload safety of five times the full scale value − with Bourdon tube pressure gauges, this is only around 1.3 times as standard.

The overload safety of diaphragm element instruments can still be increased up to one thousand times. Up to 400 bar is possible, even with a measuring range of 0 … 16 mbar. In this case, the upper flange has a specially machined, metallic diaphragm bed, against which the diaphragm element rests, should the full scale value be exceeded. Through this full-surface contact, any plastic deformation is excluded and the long-term stability is increased. For mbar measuring ranges, from the same resistant-to-deformation approach, safety against underpressure is also possible. Diaphragm elements are generally not flat. Only a contour with concentric waves enables a diaphragm travel (necessary for mechanical measurement) of one to three millimetres in length, alongside good linearity.

Silvia Weber Bachelor of Arts (B.A.)
Product Management
WIKA Alexander Wiegand SE & Co. KG
I have been working as a product manager for WIKA in the field of mechanical pressure measurement since 2011. In particular, I count diaphragm pressure gauges for the process industry and sanitary applications as being within my field of expertise. In this blog I would really like to share my knowledge with you and bring interesting aspects of mechanical pressure measurement closer to you. I look forward to your comments and suggestions.
Related articles
Accuracy Approvals Calibration Ex protection Failure Flange Level switch Pressure Pressure switch Process connection Pt100 Pt1000 Resistance thermometer Standards/approvals/directives Valves and controllers
News subscription
The WIKA news subscription informs you, free of charge, by e-mail whenever there is a new blog article. Simply define what subjects interest you and you'll be kept up-to-date! Subscribe