Float switches with reed contacts enable both reliable and economical level measurement. Accordingly, they are used in a wide variety of applications. As with all level sensors using the float principle, users must pay attention to the dead bands when configuring the float switches. What is this design-related variable all about?

A float switch, essentially, consists of a hollow body (float), a guide tube, an electrical output and a process connection. The float is designed for buoyancy in the respective liquid. Thus, it always moves on the guide tube in line with the level. In order to detect its level, float switches, such as the instruments of the RLS series from WIKA, work with reed contacts.

The reed contacts are mounted in the guide tube. They are closed or opened by a ring magnet in the float. The switching is carried out potential-free.

The float switches of the RLS series can be fitted with up to four switch points. Their positions can be distributed along the guide tube as required. However, the user must first ensure that the magnet of the float actually “passes over” the reed contact. But this is not possible over the entire guide tube length. This limitation can be explained as follows: 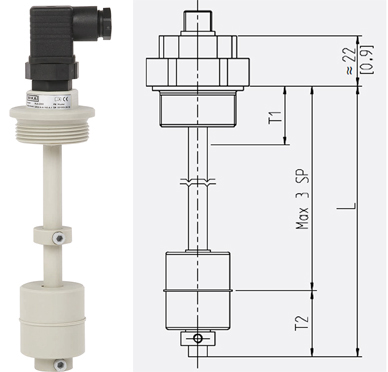 In the case of a float switch with reed contacts, such as the model RLS-2000 shown here, the dead bands T1 and T2 must be taken into account when determining the switch points on the guide tube.

Dimensions of the dead band in the data sheet

In the case of the RLS float switches, the dimensions of the dead bands are listed in the respective data sheet. For example, for the model RLS-2000, they range between 20 and 60 mm (T1) and between 30 and 55 mm (T2).

Note
Further information on the instruments of the RLS series can be found on the WIKA website. If you have any questions, your contact will gladly help you.

See also our post
Float switch: What is it and how does it actually work?
How does one specify the switch point of a float switch?

You can also find out more about level monitoring with float switches in the following video:

Oleg Greber B.Eng.
Product Management
WIKA Alexander Wiegand SE & Co. KG
Since 2015, I have been working at WIKA as a product manager for industrial level and flow measurement. I would like to use this platform to elaborate on questions regarding the technology, measuring principle and application of the respective products and to provide concise explanatory answers. At the same time, I look forward to receiving comments and suggestions from you.
Related articles
Approvals Automation Ex protection Failure Filling height Flange Force measurement Level sensor Level switch Medical engineering Pressure Pressure switch Process connection Safety Submersible pressure transmitter
News subscription
The WIKA news subscription informs you, free of charge, by e-mail whenever there is a new blog article. Simply define what subjects interest you and you'll be kept up-to-date! Subscribe