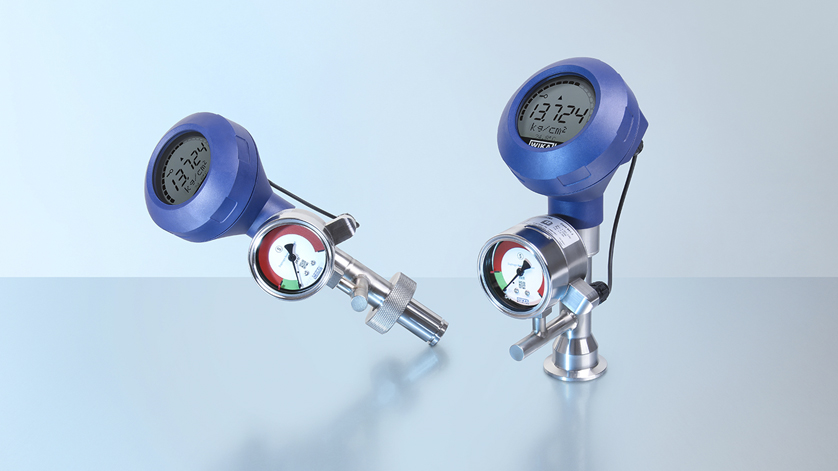 A diaphragm seal system with diaphragm monitoring from WIKA meets the highest safety requirements in sanitary applications. The model DMSU21SA with process transmitter and HART® protocol (cover picture) can also be integrated into digitalised environments.

Why did WIKA develop the patented system for diaphragm monitoring? Because diaphragm seals are basically robust and they therefore enable, in particular, the connection of electronic pressure measuring instruments to critical processes. Versions with flush diaphragms can also be cleaned without leaving residues, a must in pharmaceutical processes or aseptic food production.

Aggressive process conditions can damage the diaphragm in the long term

In the case of persistently harsh process conditions, damage to diaphragms which are generally resistant cannot be completely ruled out. Aggressive cleaning agents, for example, can cause long-term corrosion. In extreme cases, this can lead to cracks or perforations in the sensitive pressure element. The liquid for pressure transmission will escape via these damaged points and contaminate the product. Such an incident is usually only noticed too late, for example, at the end of a batch. As a result, the economic losses can be considerable.

A diaphragm seal system for diaphragm monitoring from WIKA prevents such damage. It works with two diaphragms in series. The space between them is evacuated and a pressure switch monitors the vacuum.

If there is a diaphragm rupture on the process side, the vacuum is broken. The monitoring instrument reacts to the pressure change and immediately initiates a damage alarm. Meanwhile, the second diaphragm safely seals off the process. It thus enables continued pressure measurement until the damage is repaired.

Diaphragm monitoring coupled to the logic of the process transmitter

On the other hand, the model DMSU21SA, designed for digitalised infrastructures with process transmitters and HART® protocol, only outputs one signal. This is because the logic of the transmitter also processes the pressure value of the pressure switch installed for diaphragm monitoring. The transmitter transmits the other information on process pressure, temperature and status as standard anyway. Data transmission is based on a 4 … 20 mA signal. The indication of any damage to the diaphragm can therefore happen via HART® as well as via a residual current. The latter variant also enables the DMSU21SA to be installed in an existing plant (“brownfield”).

The advantages of the “digital” diaphragm seal system with diaphragm monitoring also include easy commissioning using the plug-and-play principle. Existing measuring instruments can therefore be exchanged for the DMSU21SA without additional effort. Furthermore, the system is evaluated as a whole due to its functional concept. For use in sanitary applications, it has EHEDG, 3A and IECex approvals.

Note
Further information on the model DMSU21SA and other diaphragm monitoring systems can be found on the WIKA website. Details on risk minimisation through self-monitoring pressure displays can be found in our flyer. If you have any questions, your contact will gladly help you.

Find out more about the diaphragm monitoring system and the function of a diaphragm seal in the following videos:

Tobias Hench Product ManagerWIKA Alexander Wiegand SE & Co. KG
As a product manager for the process instrumentation division at WIKA, I am responsible for diaphragm seal systems, especially in the area of pharmaceutical products and food production. Through this blog, I would like to make the problems associated with these applications, and the corresponding solution approaches offered by WIKA, accessible to a broad customer base.
Related articles
Accuracy Adjustment Chemical Diaphragm seals DirectDrive Force measurement Mobile hydraulics Operating conditions Output signal Pharmaceuticals and biotechnology Pressure measurement device Pressure sensor Process safety Processtransmitter Temperature effect
News subscription
The WIKA news subscription informs you, free of charge, by e-mail whenever there is a new blog article. Simply define what subjects interest you and you'll be kept up-to-date! Subscribe